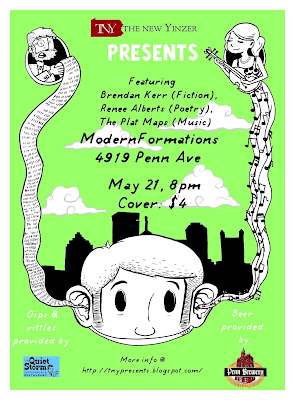 Posted by SavannahSchrollGuz at 12:29 PM

A preview of guests for the May 21st event!
On stage at Modern Formations Gallery at 8 p.m. 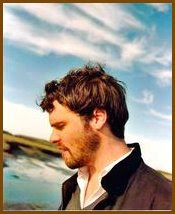 Brendan Kerr comes to Pittsburgh via Elkins, West Virginia and Brooklyn, New York. He recently completed his MFA at the University of Pittsburgh and his novel, The Uses of Talent, is currently looking for a home. Brendan plays bass with the rock band Workshop. He lives in Polish Hill and can often be found among the crowd in one local establishment or another. 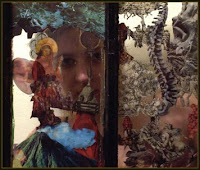 Renée Alberts listens to rivers, talks to the radio, and translates the conversations into poetry, sound and collage. She learned all of this in Pittsburgh. She's been lucky to collaborate with some of the city's finest wordsmiths and musicians, and has participated in and curated many events. Her chapbook is forthcoming from Speed & Briscoe. Witness her in 1s and 0s at http://williamthesilent.blogspot.com/. 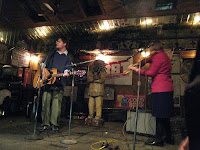 With The Plat Maps
he yelled and played guitar. she sang and played violin. others joined in on the madness. alcohol was often (if not always) involved. fun was had by all.

Some shots from the April 16th event at Modern Formations Gallery. Featured were writer Jason Jordan (among the crowd in the red T-shirt); poet Scott Silsbe (in the bottom-most photo in the camel-colored sports coat); and vocalist Julie Sokolow (on stage).

Stay tuned! The next event is May 21st! 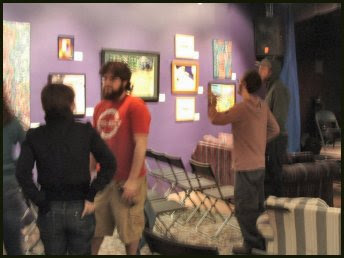 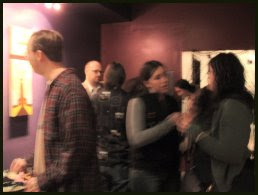 Posted by SavannahSchrollGuz at 11:21 AM 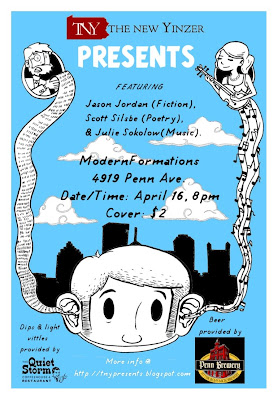 Posted by SavannahSchrollGuz at 10:41 AM 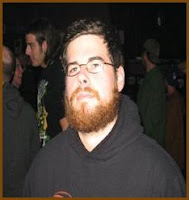 Fiction: Jason Jordan is a writer from New Albany, Indiana, who always says he's from Louisville, Kentucky, because people actually know where that is. His fiction has appeared in The2ndHand, Pequin, Pindeldyboz, VerbSap, Word Riot, and many other publications. Jordan is also Editor-in-Chief of the literary magazine decomP. He is currently in the MFA program at Chatham University, in Pittsburgh, Pennsylvania, where he is working on his first novel. You can visit him at poweringthedevilscircus.blogspot.com. 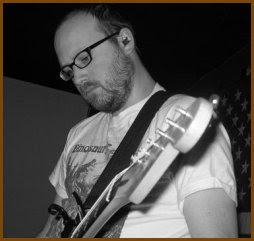 Poetry: Scott M. Silsbe was born in Detroit. He now lives in Pittsburgh, where he sells books, writes, and makes rock music. His work has appeared in Kitchen Sink, Third Coast, good foot, and The New Yinzer. He is also an editor at The New Yinzer. 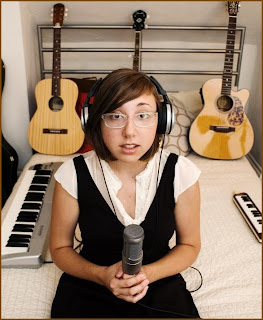 Music: Julie Sokolow
To record Something About Violins, Julie Sokolow used nothing more than her voice, an inexpensive acoustic guitar , and the built-in microphone on her Macintosh G4 Powerbook. In doing so, she has turned on its head the old adage that lo-fi is the provenance of analog fetishists. She has also created a work of great and unusual beauty.Using contrasting melodies and vocal textures, she rehashes the most painful, disappointing, and embarrassing episodes of her past. In the end Something About Violins is a portrait of an unsettled heart, isolated and caught in-between worlds.

Some excellent dips and other light vittles provided by Quiet Storm!

Posted by SavannahSchrollGuz at 8:12 AM