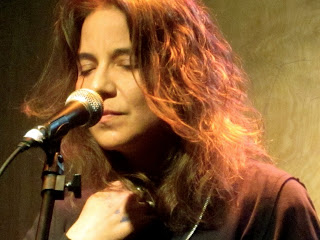 Leslie Anne Mcilroy won the 2001 Word Press Poetry Prize for her full-length collection Rare Space and the 1997 Slipstream Poetry Chapbook Prize for her chapbook Gravel. She also took first place in the 1997 Chicago Literary Awards Competition judged by Gerald Stern. Her second full-length book, Liquid Like This, was published by Word Press in 2008. Leslie’s work appears in numerous journals including American Poetry: The Next Generation, Dogwood, The Emily Dickinson Award Anthology, The Mississippi Review, the Nimrod International Journal of Prose & Poetry and Pearl. Leslie works as a copywriter in Pittsburgh, PA, where she lives with her daughter Silas, and writer/guitarist, Don Bertschman, with whom she performs her poetry. For books and videos visit http://lamcilroy.com/ 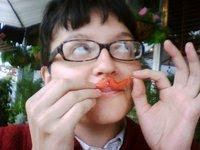 Ocean Capewell just moved to Troy Hill from Lawrenceville. She just finished touring the midwest, via Megabus, with her writing. She works at the welfare office and enjoys the occasional kale smoothie. Khet Mar is a journalist, novelist, fiction writer and essayist from Burma. Author of one novel, Wild Snowy Night, as well as several collections of short stories, essays and poems, her work has been translated into English and Japanese, broadcast on radio and made into a film. Khet Mar is an emeritus exiled writer-in-residence in City of Asylum/Pittsburgh. She has written the text and her husband, the visual artist Than Htay, created the new artwork on the façade of 324 Sampsonia Way.

Terrence Michael Carroll has been making music in Pittsburgh under the name Tee Glitter for the better part of two shitty decades. As long as he brings his notebook, he is a real artist. Thats what someone said once anyway. He's been working on two books, "Chasing the Ghost" and "What World Do You Live In?", for several years. "Underground Economy", the newest album by his band Dirty Faces, will probably be out before either book. He also performs in the bands Raw Blow and White Ghetto (formerly White Guilt). He spends his days working construction and hating his life

The Next TNY is October 20! 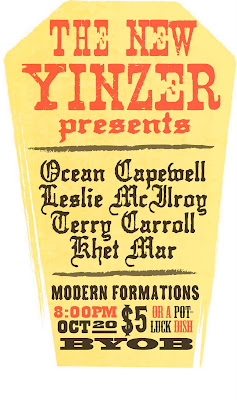