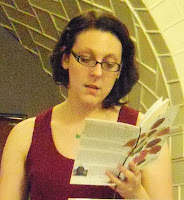 <-----Laura E. Davis is the author of Braiding the Storm (Finishing Line Press 2012). Her poems have appeared in A-Minor, Super Arrow, and Redactions, among others. The Founding Editor of Weave Magazine, she teaches poetry writing, translation, and recitation in San Francisco, where she lives with her partner, Sal.

ryanKauffman------> is an as yet unpublished poet with a BA in English Writing from the University of Pittsburgh. He resides in Pittsburgh's historic Little Italy neighborhood and hosts a bi-monthly reading series called POESIS which takes place at the Mr. Roboto Project. The manuscript "Ode To Recession" from which he will be reading was a finalist for the National Poetry Series. 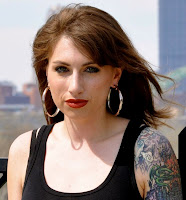 <-----Lucy Leitner is the author of the horror-comedy novel Working Stiffs, a satirical take on what happens when zombies invade a corporate office. Raised in Arlington, VA, she adopted Pittsburgh as her hometown when she arrived in 2001 to attend the University of Pittsburgh. Though she earned a masters degree in journalism from Point Park, she estimates that she has earned more money betting on Penguins games than she has as a reporter. By day, she is a writer for a local marketing firm and by night, she is usually sleeping. When not working on her second novel, Lucy covers the burgeoning Pittsburgh film scene on the Hollyburgh blog and is learning Krav Maga. 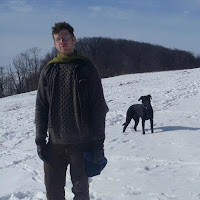 Daniel McCloskey-----> is a writer, illustrator, and founder of the Cyberpunk Apocalypse project. Recent works include his hybrid novel A Film About Billy, and a collaborative comic seriesBears in Space. His work can be found online at www.gnarlyasiwannabe.com and at finer bookstores and comic shops in the Northeast and Midwest. 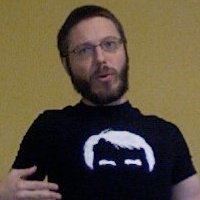