We are on hiatus for January 2009, but we begin a whole new season in February with a fantastic line-up of readers and musicians, including the excellent fiction writer Sherrie Flick and band Best Friends!

Posted by SavannahSchrollGuz at 10:37 AM 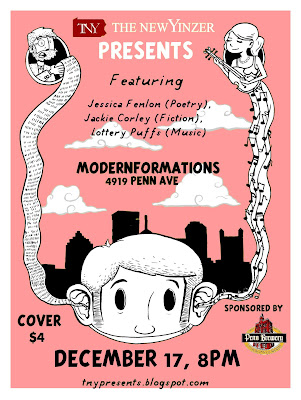 Posted by SavannahSchrollGuz at 4:05 PM

Join The New Yinzer as we unwrap our presents early with the final installment of TNY Presents for 2008. Shiny baubles abound in the fiction of Jackie Corley and the poetry of Jessica Fenlon. Batteries are included with electronic mayhem that is the mysterious Lottery Puffs. As always the pink bathtub will be overflowing with holiday spirits provided by our good friends at Penn Brewery.
Date: Wednesday, December 17
Where: ModernFormations, 4919 Penn Avenue
Doors: 8:00pm
Cover: $4 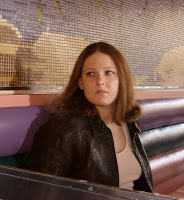 Jackie Corley was born in 1982. She developed Word Riot in March 2002 with the help of Paula Anderson. Word Riot Press, an independent publishing press, evolved out of the magazine in January 2003.

Her writing has appeared on-line at MobyLives.com, 3AM Magazine and Pequin, among others, and in various print anthologies.

Her short story collection, The Suburban Swindle, will be published in October 2008 by So New.

Artist and writer Jessica Fenlon lives and works in Pittsburgh PA. She makes art that touches on the currents of violence, everyday joys, and haunting losses that move in her peripheral vision. BFA UW-Madison, MFA School of the Museum of Fine Arts Boston. Her first book of poetry will soon be published by 6 Gallery Press soon. It is called Spiritual Side Effects.

She spends too much time at crossroads with scarecrows. She enjoys playing with fire in her free time. She is probably taller than you. 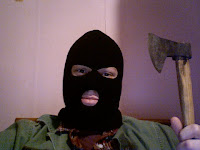 Posted by SavannahSchrollGuz at 10:57 PM