Join us again on Wednesday, July 16th at 8 p.m. at Modern Formations Gallery!

July's edition of The New Yinzer’s TNY Presents is bursting at the seams. This time around, we feature Kevin Finn, Kurt Garrison, Kristofer Collins, and Carlos Pena.

Kevin Finn: Kevin Finn is a poet from Pittsburgh, PA. He is currently pursuing an MFA at Carlow University, and working on his first book, Visible Extinction. Finn has been published in Tiger's Eye Journal, and the Pittsburgh City Paper. Also a singer-songwriter, Finn's Vessels has gained critical acclaim world wide. He lives with his wife, child and pet cat. Visit him at www.kevinfinn.net or at www.myspace.com/theinsectvoice. 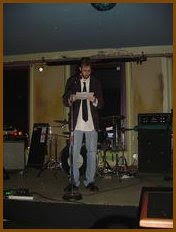 Carlos Peña: Carlos Peña seeks to illuminate life's diversity and has found music to be his most effective means in this process. In doing so, he has learned to embrace the paradoxes and ambiguity which comprise our experience. Carlos takes a holistic approach to sound production on his instruments of choice (guitar, percussion, and piano) and emphasizes the role of improvisation within harmonic and rhythmic frameworks in his style of musical expression. Born and raised in Pittsburgh, PA, Carlos has been an instrumentalist and performer for most of his life, holds a masters degree in ethnomusicology, and additionally functions as a music librarian and researcher.

Cover is $4. Light vittles and beverages will be available.
Posted by SavannahSchrollGuz at 8:58 AM 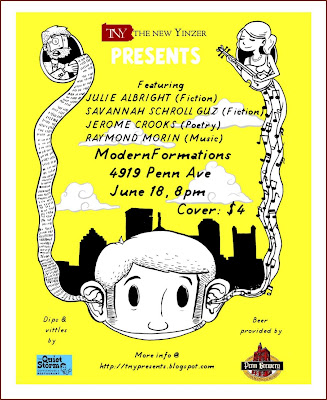 Posted by SavannahSchrollGuz at 9:10 AM