Join us Wednesday, March 18th for the next installment of everybody’s favorite potluck and performance series, TNY Presents!

On display this month will be the tasty literary talents of Michael Kimball, Kelly Ramsey, and Andy Mulkerin. Stick around for a few musical delicacies from Colin Baxter.

Also, March is designated Small Press Month. LDP Distro will be on handwith a selection of zines and micro press books for sale. http://www.smallpressmonth.org/

Cover: $5 or FREE with contribution to our Potluck Dinner
BYOB

Michael Kimball: (Reader) Michael Kimball’s third novel, Dear Everybody,was recently published in the US, UK, and Canada. His first two novels are The Way the Family Got Away (2000) and How Much of Us There Was (2005),both of which have been translated (or are being translated) into many languages. He is also responsible for the art project—Michael Kimball Writes Your Life Story (on a postcard)--and the documentary film, I Will Smash You. Michael lives in Baltimore. Find more of his world here: www.michael-kimball.com ------> 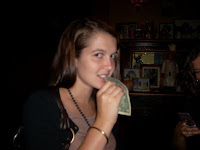 <--- Kelly Ramsey: (Reader) Kelly Ramsey is a poet and fiction writer whose work has appeared in The New Yinzer and Whiskey & Fox. She will complete her MFA at the University of Pittsburgh in April of this year and soon thereafter depart for warmer climes. 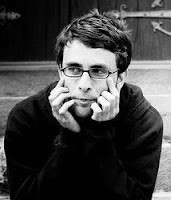 Andy Mulkerin: (Reader) Andy Mulkerin is a writer and collector of small things of no monetary value. He lives in Pittsburgh, where he lays downprose for an alternative weekly newspaper. His interests include newspaper comics and similar arcana/ephemera. --->

<--- Colin Baxter: (Music) Colin Baxter has been writing songs made mostly by stitching schizotypal fragments of notes and lyric together. Amidst habitual experiences of panic, fear, ruination and guilt, bouyancy has developed by the externalization of feeling. Reveling in multiple viewpoints, decentralization of self relieves distress and creates a net against oblivion. Aiming to change his need to change, illustrating vistas in which time becomes space and space becomes presence, looking and listening--all things are telling their story. Together with friends Mika, Nathan and Anna they bring to The New Yinzer a collection of songs. Violins, accordian, vocals, acoustic guitar and bass will be present.
Posted by SavannahSchrollGuz at 4:38 PM 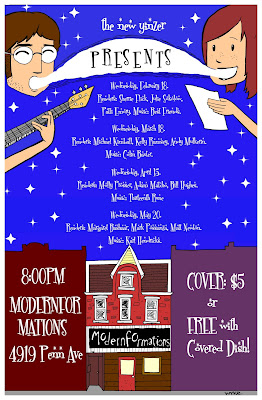 Posted by SavannahSchrollGuz at 9:15 AM