a in 2008 and is going back to school to get his masters in elementary education. He spends his creative time between writing and photography. His top three root beers are as follows: Appalachian Brewery Co. Root Beer, D's SixPax and Dogz 1919 Real Draft Root Beer, and Dominion Root Beer. He is an atheist and currently learning Japanese. 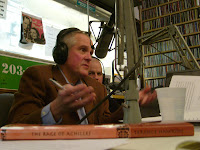 Terry Hawkins (Reader) was born in Uniontown, PA in 1956. He is author of the novel Rage of Achilles. Through a series of administrative errors still the subject of chagrined scrutiny, he was permitted not only to attend but graduate from Yale, where he was publisher of the Yale Daily News. The wind next blew him to Madison, Wisonsin, for law school. After practicing there for three years, he returned to New Haven, where he chases ambulances for a day job. Find out more about Terry here.

Crystal Hoffman (Reader) Crystal Hoffman's poetry is forthcoming or has in appeared in journals such as A Capella Zoo, FRiGG, Weave, Blackbox, and The World According to Goldfish. She fancies herself a revolutionary for a number of reasons, one of which is The TypewriterGirls Poetry Cabaret (typewritergirls.net), where she subverts banalities in order to create living poetic experiences. In order to eat, she teaches English Literature and Composition courses at a community college and works as a pen-wielding mercenary for organized labor. It is her dearest wish is to decrease the amount of concrete in the world.
The Skirt Tasters (Music) Rock and Roll + Poesy Slingin'
Posted by SavannahSchrollGuz at 10:09 PM